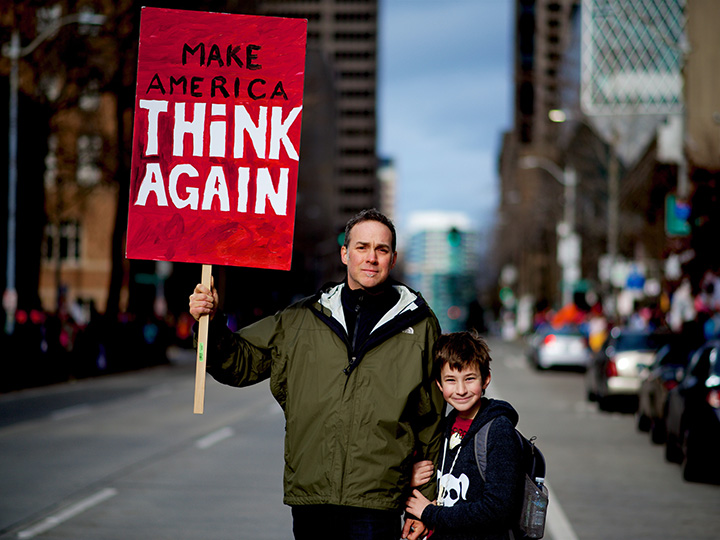 Is this what we want?

Have we rejected our pluralistic roots? Do we now favor a narrowed ideology, requiring everyone around us to fit into parameters we, ourselves, deem acceptable?

To be sure, some ideologies are repugnant. Some are already illegal. Even so, we’ve always accepted a broad spectrum of ideas, expecting disagreement, sometimes even welcoming dissent.

Not so much now.

Both sides seem madly determined to enact their causes, elect their hacks, force their policy into law. Regardless of which side wins, we’re facing some level of totalitarianism.

If the right wins, we get a spastic, Janus-faced Trumpocracy where we piously proclaim the separation of church and state even as we read Bible verses at school board meetings. We legislate morality, we pooh-pooh Jim Crow, we mistake a handful of principles for sweeping, theoretical postgraduate-level studies that couldn’t be put into secondary school curricula even with great effort. We tell you what you do in your bedroom is your business — as long as it’s one man, one woman and one (missionary) position.

If the left wins, we get the utter insanity of wokeness as policy — we label the opposition’s positions hateful, bigoted, racist, homophobic, transphobic, xenophobic, anyphobic or just plain impolite. If we can’t get the opposition to shut up, we get their platform defined as hate speech. Without the slightest sense of irony, we pat ourselves on the back for how tolerant we are — tolerant, that is, as long as you agree with us. And we relish in embracing every self-indulgent, lunatic vagary that comes along, especially if it pisses off the right.

Back when I debated, the moment I made my opponent angry enough to call me a name, I won the battle. It was understood that name-calling was outside the framework of proper debate and, thus, grounds for losing. Today, we begin with the name-calling. Right up front, we scream names at the other side. It’s easy, too, because, as I already pointed out, the left has labeled everything they deem unacceptable from the right as some kind of awfulness that needs to be outlawed.

To be sure, sometimes they’re correct. But simple disagreement is not hate.

Hate is a strong word. So are bigot and racist. We throw these words around, a cacophony of careless name-calling, each inappropriate utterance cheapening the real and vile meanings of words we should be careful using. Just because someone disagrees doesn’t automatically brand them a hater, bigot or racist. When those terms are watered down to the point they mean little, we’re going to have to come up with some new words to shout. We’re dangerously close to that point.

The right doesn’t have the benefit of catchy terms to hurl at the left. Somehow, socialist doesn’t have the damning cachet and communist lost its punch way back when Jane Fonda was holding signs and chanting slogans. There’s always liberal — or the absurdly popular libtard — but those names only have pejorative meaning to those who actually use them. No one else cares. Still, the right boasts an equal amount of hate directed at the left, enough so I’d call it a draw. Plus, words be damned, the right likes to show up at showdowns with guns.

Where has all this unyielding nastiness gotten us?

Each side now believes the other is beyond salvage.

The Fascist Right is an ignorant, racist, militant, gun-loving, anti-science mob pining for the days when law-abiding white people had it good, Black people weren’t clamoring for change, a Latino majority was still 50 years away and nobody ever heard of alternative pronouns. We must eradicate this jack-booted Fascist Right lest they destroy our American way of life!

Or it’s the Marxist Left which is hell-bent on indoctrinating our children with collective white guilt, transgenderism and Bolshevist ideals, a hyperventilating over-woke mob who despises the U.S. and would love to see a red revolution or at least a suffocating cap-and-trade enacted. We must eradicate this Pinko-Commie Left lest they destroy our American way of life!

This thinking has given us a dangerous gift called permission.

The other side is so irreparably broken, that our side now has a holy mandate. This holy mandate gives us permission — permission to do whatever we need to do to achieve our ends because that end-goal is now a moral imperative. This is frightening.

Both sides are now absolutely convinced they hold the moral high ground.

Any person or group who believes with religious (or religiously secular) fervor that they hold the moral high ground also usually believes their moral rightness allows them not to worry much about pesky details like rules because their lofty end-goal justifies any means.

I am reminded of one event neatly summing this up. Back in 2018, two teenage girls were quietly and legally protesting outside an abortion clinic in Toronto. It doesn’t matter that this took place in Canada and the issue is less important than how it was addressed. A hairdresser who was vigorously pro-choice first defaced the protesters’ signs, which led to one of the girls recording his actions with her cell phone. Without warning, the hairdresser then violently roundhouse-kicked the girl’s upper body, causing her phone to fly out of her hand. This man was incensed by protesters he considered morally wrong, enough so he felt justified in drop-kicking one because he, himself, was piously right.

The irony is both delicious and sickening and it’s not limited to a leftist hairdresser.

When both sides are convinced they hold the moral high ground, we get drop-kickers, both blue and red.

Let’s take it a step further.

When you hold the moral high ground, it’s easy to see your end-goals as sacred. Heck, when you’re certain you’re right and the other side is wrong, why compromise? Even worse, many people consider ANY compromise to be a personal failure, an abandonment or disparagement of morals they hold sacred — even a capitulation.

The similarities in how the two sides justify their actions is remarkable — not only can they not talk to each other, they can’t yield even a single point or else it’s somehow endorsing or legitimizing an unendorsable, illegitimate entity.

See how that works?

When you’ve cartoonized the people you oppose into hateful, awful, alien gangs — or when you’ve retreated into your own cartoonized mob of ogres — you effectively kill discourse. Without discourse, one side must become strong enough to force the other side into compliance with its constricted ideals.

And that’s where we’re headed.

In the realm of public politics, it doesn’t matter how correct we think we are, it’s critical to have the ability to compromise. But now, we are electing grievance activists to office — people who drank the Kool-Aid then went back for more. Little will stand in the way of these true believers seeing their end-goals met.

Not that long ago, an elected official might be targeted with the occasional hurled tomato out in the country or the tomato’s city equivalent of an f-bomb or ten. These days, we’ve sworn off heckling with fruit and curses. Instead, we work hard to destroy an elected official with whom we’re displeased. No longer are we content to wait until the next election to vote the offending official out, now we must do as much damage to the official as we can. The moral certainty of rightness gives us license to go after an elected official’s livelihood, housing, even family.

And that’s not all.

Some groups like to send members to observe the opposition, for “security,” they say. Even if they just stand silently and stare, hulking guys with guns create menace, not security. Of course, everyone knows this, even if they play stupid. The menacers monitor campaign gatherings and post themselves outsides officials’ homes. Nothing illegal, mind you — just a subtly threatening reminder that those who seek to serve are being scrutinized by the other side.

Reasoned centrists are becoming unwilling to serve — not worth it, too dangerous, too much to lose. Who’s left? The grievance activists with their endless supplies of hyperbolic invective and Kool-Aid. What they lack in real intellect they make up for in their ability to rile a crowd. And they feed off the vitriol.

Maybe it’s just me but I cannot imagine living in a world where everyone around me is required to act, speak and think more or less as I do.

And I’m tired of living in a world determined to get us there.

Matthew Meador is a former food and wine writer, senior editor and a rare moderate Republican who now writes political commentary. Previously, Matt was an award-winning graphic artist who often put his skills to use during election seasons. Matt has served in various capacities on political campaigns, for pollsters and for elected officials. Contact him at matthewmeador.com.

More from MeadorMore posts in Meador »