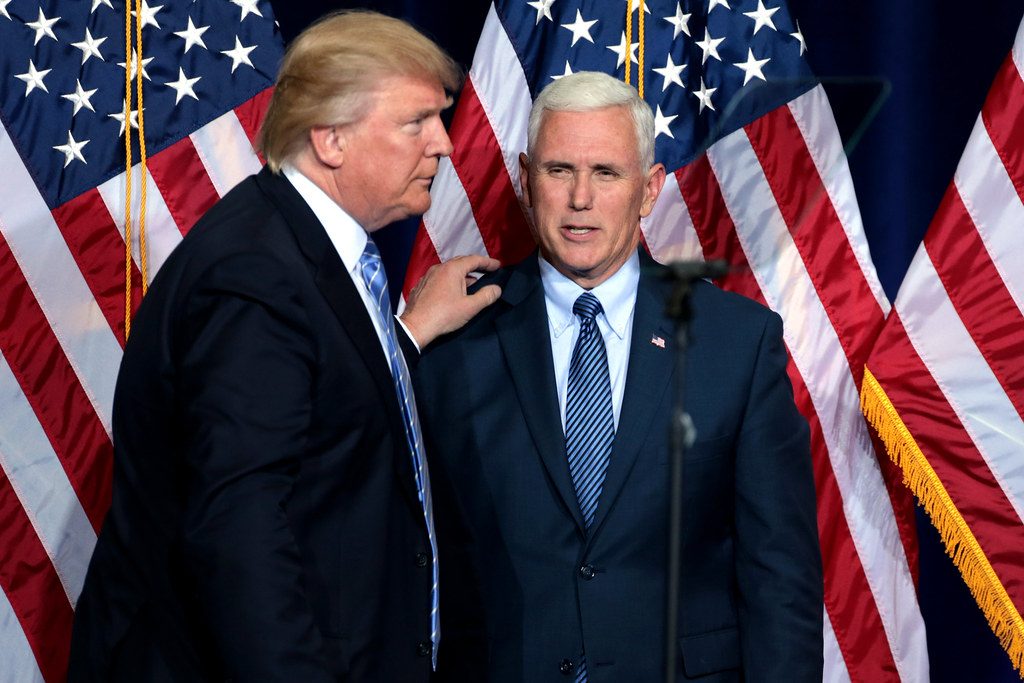 After four cringeworthy years as Trump’s most obvious and pitiful sycophant, Mike Pence finds himself not only kicked to the curb, but thrown to the wolves. Make no mistake. The gallows and noose, so speedily erected by the bleating mob, were intended for one purpose – to “hang Mike Pence,” a man they called “a traitor.”

Back in 2016, Trump chose Pence as his Veep solely to ingratiate himself with right-wing evangelicals, whose support was ebbing after release of the infamous Access Hollywood Tape. And Pence took to the role like a puppy training for the Westminster Dog Show, all but genuflecting in Trump’s presence and endlessly lavishing Trump with “Dear Leader” praise. Indeed, Pence routinely gazed at Trump with a look of such adoration that some wondered if “mother” should be worried.

At the end of the day, though, this supreme flunkey couldn’t bring himself to blatantly violate the Constitution in what Pence surely knew would be a futile attempt to keep Trump in office. The minute Pence announced that the Electoral College had elected Joe Biden president, Trump put a huge bullseye on his Veep’s back. Trump knew his rioting swarm was out for blood, and he served up his Veep on a platter tweeting, “Mike Pence didn’t have the courage to do what should have been done to protect our Country and our Constitution . . . USA demands the truth!”

All the fawning and bowing and scraping of the last four years was for naught. Now Pence, who so dearly wanted to inherit the support of Trump’s minions, finds himself, instead, hated by those acolytes. Whether or not Pence knows it yet, he is a man without a political future. He should have seen it coming.

Incredibly, all the Republican Senators who will vote to acquit Trump seem unable to see themselves in Pence’s shoes. They’re convinced that Trump will reward their fealty, that they are special, somehow exempt from Trump’s wrath. They should dream on.

It will be interesting to watch Marco Rubio, Lindsey Graham, Ron Paul, Josh Hawley, Marsha Blackburn, Tom Cotton, and Ted Cruz, all of whom see in themselves a future president, jockey to be Trump’s favorite. That, of course, is a fool’s errand. Trump’s favorite candidate is, and always has been, Trump. And, if it’s not Donald himself, it will be someone named Trump – Donny Jr., Ivanka, or, yes, even the hapless Eric.

As for those GOP senators not running for president in ‘24, they are – with precious few exceptions – a group for whom the power and perks of being a senator mean more than their sworn oaths to protect and defend our Constitution against all enemies foreign and domestic. They fear that, if they cross Trump, he will recruit, and support, a primary opponent to run against them. They surely can’t risk that so they remain his supplicants at the steep, sorry price of selling out our country.

The Mike Pence saga is a cautionary tale, one that Republican senators ignore at their peril.

Run of the river 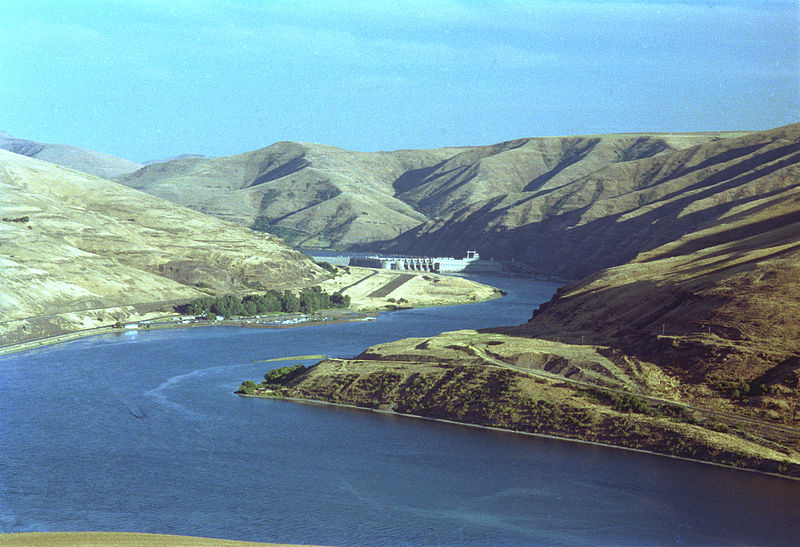 Run of the river

Thirty years ago last month then-Idaho Governor Cecil D. Andrus stood at the front of a crowded hotel ballroom in Boise to warn the Northwest’s industrial and energy interests that the Endangered Species Act (ESA) was coming for them, and that the demise of the region’s salmon populations would eventually force them to change.

“We have to tell the Bonneville Power Administration (BPA) and the Corps of Engineers that they’ve had a microchip in their head on how to run the river,” Andrus said at his “Salmon Summit” in 1991. “That should be removed and replaced with a new chip, in which you say, ‘You will maintain this river for the fish, as well as power generation.”’

Later that year, the first endangered species salmon listing was handed down setting off three decades of litigation and involving massive – and largely ineffective – spending on fish and wildlife. And yet the iconic fish struggled on.

Andrus, rarely a pessimist, eventually came to believe the region’s only salmon strategy was simply to stall until the last of the fish were gone leaving nothing left to fight over.

Nevertheless, the region’s Native American tribes and fish advocates fought for salmon, often winning repeat victories in court and slowly bending public opinion against the traditions and influence of BPA, the often-clueless Corps, the inattention of administrations of both parties and deeply invested special interests ranging from irrigators to port commissioners.

Now, in what must be one of the great political ironies of our age, this long, litigious battle over fish, power and river operations finds a most unlikely champion, a former dentist from eastern Idaho, a conservative Republican politician more at home on a golf course than in a drift boat.

This week, Mike Simpson, the one-time Trump loathing congressman from Blackfoot who discovered Trumpian religion just in time to avoid any challenge to his 22-years in the House, rolled out a plan for the region’s grandest social engineering project since Franklin Roosevelt envisioned a Grand Coulee Dam in the 1930’s that would turn the Northwest’s “darkness to dawn.”

And like the very transactional Roosevelt – Montana Senator Burton K. Wheeler said FDR rewarded the region’s senators with a dam in exchange for political support – Simpson’s audacious, $33.5 billion plan is all about the lubricating influence of a billion here and billion there. There is money and projects in his plan to compensate every affected interest when, as Simpson envisions, the four fish killing dams on the lower Snake River in eastern Washington are breeched in the next decade.

Pat Ford, who has fought the good fight for Northwest salmon for as long as there has been a fight, told me this week what Simpson “is a true believer in restoring the fish.” And then marveling at the reality, Ford stated the obvious: “The most committed politician in the region to restoring salmon stocks is a conservative Idaho Republican.”

While Simpson richly deserves the accolades he’s received from many quarters – particularly tribes and conservation interests – for reshuffling the cards around fish and power, it’s impossible to escape the sense that the region’s deeply embedded special interests – and their often rabid grassroots supporters – are willingly going to do anything other than what they have been doing since Andrus’s speech, which is nothing to help the fish.

The harsh political reality for salmon and for the Idaho congressman is that this fight, like all our political fights, is less about solving seemingly intractable problems than prevailing over “the other side.” Truth be told those four lower Snake River dams, condemned almost from their inception as expensive dinosaurs that would eventually destroy the fishery, are more important for what they represent than what they offer.

In reality the dams are political symbols, concrete proxies in the continuing western mythology that real men exist to remake rivers, tame Mother Nature and vanquish environmentalists. After spending years insisting dammed rivers can co-exist with migrating fish why admit it was always a lie?

Even as Simpson’s plan offers the promise of billions in goodies and the end of endless litigation, the grassroots forces who have defended the dams with religious vigor, while hating those who advocate for the fish, will find a “come, let us reason together” argument no more attractive than brackish slack water.

Eastern Washington congresswoman Cathy McMorris Rogers is the epitome of how this mythology works. She immediately blasted fellow Republican Simpson’s plan with a line that had the precision of a fearful focus group. “These dams are the beating heart of Eastern Washington,” McMorris Rogers said, knowing just how to connect the culture of concrete with the grievance of 21st Century conservative politics.

Will southeastern Washington Republican Jamie Herrera Beutler, one of the few House members to buck her party on impeachment and under fire for it, really pick another fight with her conservative base by getting on board with Simpson? What prevents the calculating, do nothing Jim Risch, who has done it before, from kneecap Simpson’s plans by quietly stoking the ready opposition?

Simpson’s calculation is that he has, at best, a two-year window of opportunity to sell his idea.

With Joe Biden in the White House wanting a historic infrastructure bill, and with Oregon Senator Ron Wyden sitting atop the Finance Committee, Simpson might – might – have an opening. Don’t count on it. When Wyden outlined his own priorities recently salmon wasn’t on the list.

If American politics were more like 1980 when Henry Jackson and Frank Church and Mark Hatfield attempted the region’s last grand design to head off the end of salmon – the Northwest Power Act – Simpson’s billions of dollars in carrots without a stick might have a chance, and the fish might have a future. But today there is no Scoop Jackson, and no Mark Hatfield and region’s once proud bipartisan altruism is long out of fashion.

The Idaho congressman has taken this intriguing kickoff to his own 20-yard line. He’ll need the kind of regional offense not seen in decades to cover the next 80 yards to the end zone. The clock is running, and it benefits the same old group that wants to do nothing.