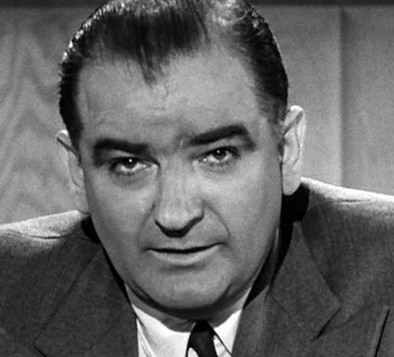 During his four-year run, the burly bully from Appleton dominated headlines and ruined careers with his reckless and unproven allegations that Communists had infiltrated the federal government. As his reign of political terror advanced toward censure by his own colleagues, McCarthy became ever more brazen, even attacking the patriotism of members of the United States Army.

McCarthy’s followers condemned Dwight Eisenhower, the celebrated supreme allied commander of European victory in World War II, as “a communist.” McCarthy used a Senate speech to attack General George Marshall, one of the great heroes of 20th Century America, for being soft on communism. Marshall’s biographer says McCarthy’s speech was so hysterically over the top, so obviously full of innuendo and bad faith, that few senators remained in their seats to listen to the tirade, but few also condemned it.

When the roll was called in the Senate on McCarthy’s censure in 1954, Idaho’s two Republican senators – Henry Dworshak and Herman Welker – refused to condemn McCarthy, indeed they defended him, made excuses, embraced his delusions. According to contemporary accounts, Welker prowled the Senate floor during the censure vote muttering threats to those attempting to hold McCarthy to account. Dworshak, handpicked by McCarthy, served on the committee that investigated McCarthy’s wild accusations against the Army but made little contribution. One McCarthy biographer said the Wisconsin senator effectively silenced the “timid” Dworshak and publicly insulted him by wishing he had selected someone else.

The events surrounding McCarthy during that long-ago December seem both a distance echo of American history and as fresh as today’s front page. As the conservative commentator Jonah Goldberg wrote recently, “McCarthy liked to insist he had evidence of communists in the government, but he couldn’t show you the names right now. The number of communist infiltrators on his secret list changed from speech to speech.”

In this December we are experiencing a new kind of McCarthyism updated for the Trump Era.

“Listening to President Donald Trump’s legal team claim over and over again that they have voluminous evidence that the election was stolen,” Goldberg says, “it occurred to me that we’re in a kind of repeat McCarthy era. Only this time, to borrow from that old-school communist Karl Marx, history is repeating itself not as tragedy but as farce.”

It took four long years for the Senate – and many Republicans – to admit that McCarthy’s protean tactics and political treachery were a genuine threat to the stability of American citizens and institutions, everything from the legal system to the Senate itself. McCarthy intimidated and bullied anyone who questioned him. His weapon was not fact, but intimidation; intimidation meaning if you had the backbone to challenge him McCarthy would summon down the wrath of his supporters on those who stepped out of line.

A handful – Maine’s Republican Senator Margaret Chase Smith most notably – had the courage to confront McCarthy, but most held their tongues while his power grew, and his outrages expanded. “The fifties were like that,” historian Ellen Schrecker wrote in her study of the era, “less a world of fear than of silence.”

Nearly a month on from the presidential election that will turn Donald Trump out of the White House, a firehose of lies about voter fraud and rigged elections tumble from the presidential Twitter feed to be amplified by his minions on cable television and across the Internet. The lies have been refuted repeatedly by a bipartisan collection of state election officials, Trump’s own attorney general and the cyber security expert the president fired for truthfully saying the recent election was the most secure in American history.

In a true McCarthyesque through the looking glass turn, William Barr, the Trump appointed attorney general who has defended the president at every turn, is now dismissed as a traitor and agent of “the deep state” for saying there is no evidence of fraud that would change the election outcome.

A Republican election official in Georgia, one of many needing police protection now for doing his job in a state where Trump continues to lie about a rigged election, demanded this week that Trump end the deceit, saying “Someone’s gonna get shot. Someone’s gonna get killed…and it’s not right. It’s not right.” The official, Gabriel Sterling, put a fine point on what is happening with his fellow Republicans. “This is elections,” Sterling said, his voice quivering with indignation. “This is the backbone of democracy, and all of you who have not said a damn word are complicit in this. It’s too much.”

Yet, all of this – the lying, conspiracy theories, attacks on an election that wasn’t really all that close, the full-on assault on democracy – has engendered a world of silence from most elected Republicans. They are ending the Trump presidency as they began – with eclairs for backbones. And no Republican senators better exemplify this chicken-hearted response than the two from Idaho who now fill the seats once held by McCarthy’s enablers.

Jim Risch is proving to be a worthy heir to Henry Dworshak. While Dworshak is remembered in Idaho, to the extent that he is remembered, for a big dam on the Clearwater River, the history books (briefly) note him only as a dead ender for Joe McCarthy. Risch has gone all the way up and now all the way down with Trump.

Mike Crapo, twenty years in the Senate, has little more to show for that tenure than Herman Welker, the angry senator and credulous McCarthy defender whose seat he now occupies.

A month on from the November election, neither man has uttered a word of condemnation, concern or care about Trump’s blatant attack on democracy even as the conservative National Review points out, “Almost nothing that the Trump team has alleged has withstood the slightest scrutiny.”

Crapo and Risch seem to care less, again to quote National Review, that “Flawed and dishonest assertions like this pollute the public discourse and mislead good people who make the mistake of believing things said by the president of the United States.”

Like Idaho’s Welker and Dworshak from an earlier day, Crapo and Risch will be remembered to history, not as they might hope, but rather because they are complicit in the worst attack on American democracy in the history of the presidency.