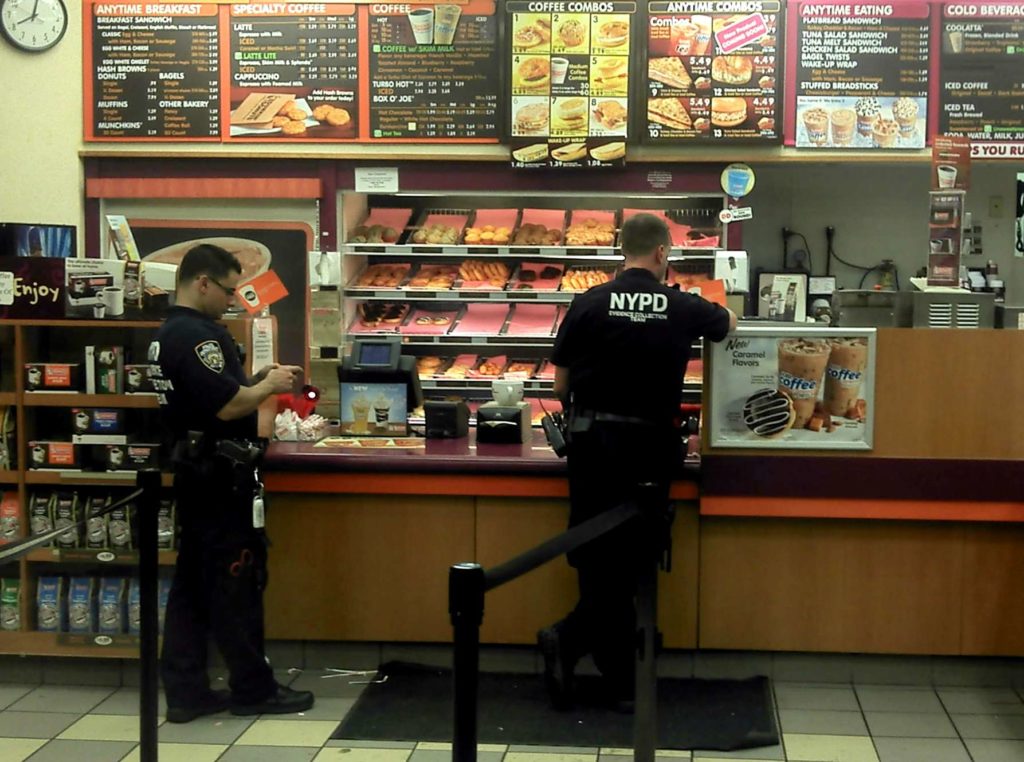 With the possible exception of the Civil War, our nation now seems more divided, more acrimonious, more splintered and filled with outright hate than at anytime in our history.

The causes are many. Solutions seem few. Each day, it seems another dose of division is sewn into our nature and those divisions appear wider than ever. None of us can escape them. Nor should we if we’re ever to come out of this dark period intact.

But, one societal separation bothers me more than any other. And that’s the often stark divide between citizenry and law enforcement.

It’s not enough to say there’s fault on both sides. Which, of course, there is. Our suspicion of some of them and their suspicion, and on occasion, treatment of some of us seems to make the news daily.

What set this train of thought going for me was an incident that happened just down the road from our house the other day. Six local officers coordinated their morning break time to meet at a coffee shop for a latte or two. As they sat chatting, the manager came to the table and asked them to leave. Just go! Seems a customer had complained the presence of the officers was making him/her “uncomfortable.”

There’s so much wrong with this picture. Obviously the action of the manager was ridiculous. So, too, was the unreasonable request from the customer. The presence of half-a-dozen local officers was “disturbing?” Why? My first reaction to the story was what was in the customer’s mind - or background - that made him/her so “uncomfortable?” And the next thought: was the customer Black? A totally outrageous situation made worse because of the extreme ignorance of both the customer and the manager.

This dustup may be isolated. But, there’s more at play here than just a citizen complaint. While conduct between most law enforcement and most citizens on a daily basis is routine, we’ve seen many instances when it’s not. The oft-photographed murder of unarmed Black men and teens springs to mind. The difference in treatment by law enforcement on the basis of race has been well-documented. And, whenever it happens - wherever it happens - it’s wrong.

And so is this: the dangerous decisions by lawmen in many parts of the country that they’ll enforce certain laws and ignore others. Our western sheriffs are often the most strident. In Washington, Idaho, Utah and Oregon, many have not only said they won’t enforce gun laws but will actually arrest federal officers who may try to do so. Sworn to uphold all laws, some have decided to be selective. Which is illegal and sends terribly mixed messages to citizens. When is a law right and when is a right law deemed wrong? That’s what courts are for. Not cops.

The relationship of law enforcers and law abiders is one of the most important basics in a civilization. The balance is best when there’s trust demonstrated by all participants. But, when officers become selective - when they become threats to unarmed citizens through words or actions - the results can be deadly.

Similarly, citizens can also alter that delicate balance by acting inappropriately or making unreasonable demands. Our local “uncomfortable” latte drinker is one such.

In younger days, I spent a lot of nighttime hours doing “ride-alongs” with cops. I became very familiar with some of the dangers they face each shift and some of the unreported good things they do just because they’re the right kinds of people. I have a healthy respect for what they do, how they do it and why. Often dangerous work. More often, thankless work.

We need them. They need us. It’s just that simple. We may live in difficult times. We may be surrounded by politically turbulent times. We may be victims - or perpetrators - of the hateful divisions faced daily or deluged by lies and disappointments in our national politics.

But, we must strive for - earnestly work for - a continuing respect for laws and the people who enforce them. If we lose that trust - that faith - that respect one for another - not much else matters.