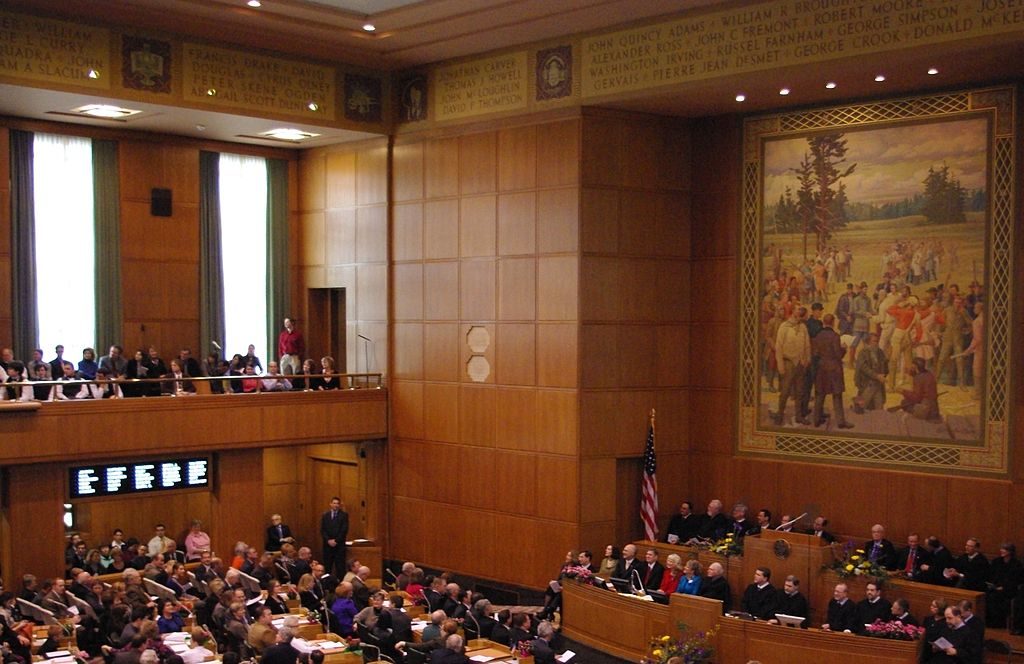 One decade ago, following the 2008 general election, something unusual happened at the Oregon Legislative Assembly: One party controlled both chambers with supermajority numbers.

Democrats held 18 of the 30 seats in the Senate, and 36 of the 60 seats in the House of Representatives. The numbers were significant, because since 1996 the Oregon Legislature has been required by the state constitution to obtain three-fifths of each chamber to approve "bills for passing revenue." Until 2009, neither party had controlled enough seats in both chambers to meet that requirement.

The 2009 session was ambitious for the Democrats. Its results included the Healthy Kids Act (for children's health care), major transportation projects (including the Newberg-Dundee bypass) - and significant tax increases to pay for it all, changing income and other tax levels.

In the 2010 election, Democrats lost their supermajority control. In the House, they lost enough seats to result in an even split - meaning joint control - with Republicans.

Now, a decade after all that, Democrats again have supermajorities in both chambers - just barely. They control 38 of the 60 House seats, and 18 of the 30 Senate seats. (One of the Democratic senators has been known to split from the caucus on certain votes from time to time.) A question for legislators this session is: How cautious might they be, considering recent history?

Some early indicators say: Not very. Governor Kate Brown, fresh off a campaign in which her opponent argued that schools have been underfunded, has proposed a $2 billion tax increase, intended mainly to boost public school funding.

One of the critical questions surrounding that will call for quick consideration: Exactly where should expanded funding go? Brown's proposal is aimed mainly at public schools. But higher education advocates point to persistent underfunding of the state's colleges and universities. Several organizations, including the Oregon Student Association (which includes college and university students) are pushing for as much as $2 billion more for higher education.

School funding may be getting a brighter spotlight this session than usual, but it is a perennial issue, and other perennials will sprout as well.

The high cost of the Public Employee Retirement System (PERS) will come in for another examination, as in many past sessions. The scaling down of costs urged by its critics won't necessarily get a lot farther than it usually does (which is not very), but some new ideas are being broached. Among them, coming from at least one Democrat: Developing a new system of retirement planning for new public employees along the lines of a 401K system.

Greenhouse gas control, which was a hot topic in the last couple of sessions but did not get far, will be back. A planned "cap and invest" bill has been in development for weeks, and may be one of the hottest debate topics early in the session. Brown's proposed budget could provide some added impetus this year on the subject, since she is proposing creating a new Oregon Climate Authority which would help govern a state carbon marketplace.

The coming months will also, however, see a large collection of new, or at least newer, legislative proposals.

Affordable housing, the subject of the only constitutional amendment approved by voters on last year's general election ballot, will be the focus of several bills. What form the proposals may take is not clear yet, but an evident voter concern about the issue is likely to result in a strong push. One option mentioned by many legislators (and pushed by a group called the Community Alliance of Tenants): A statewide plan to set limits on rent prices.

Other hot-button topics may generate bills which have a rougher ride. Guns will be back for discussion with a proposal to increase penalties for owners who fail to secure their weapons. One bill summary suggests the new law could impose fines of $500 for a simple offense and up to four times as much if a child gains improper access to the gun. Senate President Peter Courtney of Salem is proposing Oregon toughen its driving under the influence legal limit, dropping the allowable level from a blood alcohol level of .08 now to .05. Only Utah has a limit that low.

Senator Floyd Prozanski, who in 2017 proposed an unsucessful measure which might lead to interstate commerce in cannabis, has said he may be back with a similar idea this session. A business group called the Craft Cannabis Alliance is proposing to do something similar. (The trade would apply only, of course, to states which like Oregon have legalized marijuana.)

How to pay for all the many ideas circulating? That's where much of the heat - and the critical nature of a Democratic supermajority - come into play. Plenty of tax proposals have surfaced, ranging from increases in minimum business taxes, to changes in kicker tax rebates, to changes in how property assessments (for tax purposes) are calculated. In most recent years passing these tax plans has been, if not impossible, then very difficult. They may be easier with supermajority Democratic control.

At least up to a point. Some Democrats may hit the caution button along the line, recognizing that Oregonian tolerance for tax increases, especially very many at any one time, is distinctly limited. The latter weeks and months of this year's session may hinge on that calculus of the desire to make improvements and advance services around the state, against the cost of paying for them.

The formal session begins in January 22, and runs to mid-summer. A short organizational session will run from January 14 to 17 and include formal swearing in, committee organization and bill introductions.