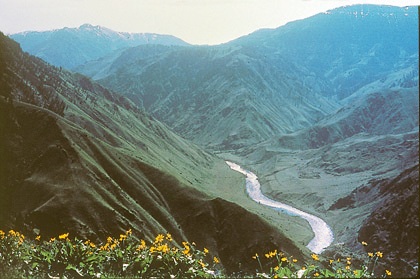 To those readers who might be interested, I am recommending two books, which reflect my bias. The first is “Hells Heroes,” which hit bookstores this week. Published by Caxton Press of Caldwell, it is my fourth book. It is the fascinating story of how one of America’s hidden gems, Hells Canyon, finally obtained federal protection as a National Recreational Area.

It tells the story through the eyes of it’s catalytic hero, Brock Evans, who led the fight while northwest representative for the Sierra Club. Truth be told, Evans wanted National Park designation. Therein lies a story that gives a mere hint of the various politics involving the canyon that went on for years behind the scenes.

Hells Canyon, nonetheless, is truly one of those special places that leaves one awestruck. One of the deepest gashes in the surface of the earth at 7,000 feet, it is deeper than the Grand Canyon.

Special places require special people who exhibit true passion for their objective. The first part of this book gives both the politics and intersperses personal anecdotes. The second part of the book is the equally compelling story of how when it came time for the Forest Service to write the regulations governing land use policies within the NRA, the leader of the Idaho Recreation Council, Sandra Mitchell, stepped forward to lead the fight to protect the right of jet boats continuing access to the Canyon. A segment of the recreation community, those who enjoy rafting and kayaking the Canyon, sought to preserve their interest in solitude by having jet boats banned. Mitchell’s story is as compelling as Evan’s and each developed respect
for the other during the process.

While they had their differences, they also had areas in which they agreed, such as the Forest Service’s mismanagement of it’s mandate. Both strongly believe that rangers within the Hells Canyon NRA still manage with a multiple use mentality, which is not good, and in fact can be detrimental to the resource they are charged with protecting.

The book also contains some fine photographs which capture some of the unique features of the Canyon. We owe these pictures to Steve Lee and Marcia Carlson.

The second book, “A Higher Loyalty,” by James Comey, the distinguished former director of the FBI and former Attorney General, who was summarily fired by President Trump for bogus reasons, because he would not pledge loyality first to the President. Comey’s book is about ethical leadership and thank God we still have Americans who are not afraid to stand up for truth and justice. For Comey, character counts and one’s loyality as a public servant is first to the truth, then to the Constitution and then to the American people. Comey does a good job of establishing how his value system developed. He recognizes there are many ambiguities and no simplicities at the top of the political pyramid. For many it comes down to, who does one trust and believe.

Comey avoids the he-said/she-said, instead focusing on facts and imperical data. He concedes that over the years he has had to work at tamping down his own healthy ego. He never claims not to have made some mistakes, nor that people can look at the same set of data and draw different conclusions.

He rightly deplores President Trump’s blatant efforts at trying to undermine public faith in our institutions. He especially deplores Trump’s attacks on the FBI, which insults thousands of good employees. His notes on meetings with the President in which Trump tried to demolish the agency’s independence are simply incredible reads.

He nails Trump for the bully that he is and draws a parallel between Trump and how he operates with how a Cosa Nostro (mafia) boss operates. It is not an exaggeration. Comey also makes enough references to Trump and the Russian investigation that one senses he believes it to all be true, right up to and including Trump covorting with Russian prostitutes. He also thinks Putin may have film.

Comey’s book should bedevil Trump for the rest of his days. Trump cannot be trusted and is simply an inveterate liar. I believe there are enough people of courage and conviction, who like Jim Comey, will stand up for the truth, who believe that no man including the President stands above the law and their voices will be heard in 2018 and 2020. God Bless James Comey who is standing up for the truth and God Damn Donald Trump.