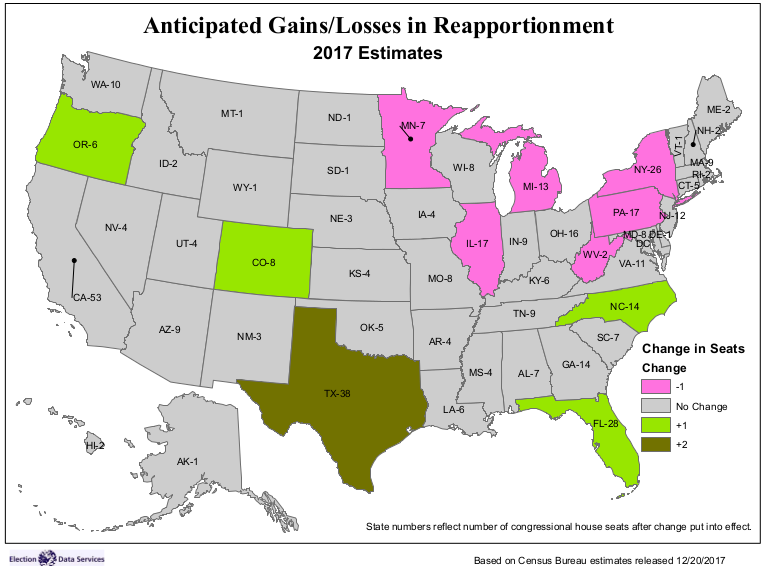 One of the big Idaho headlines this last week concerned the new Census estimates for growth in population, by state, over the last year. This year's report shows Idaho growing faster than any other state, which may be a first.

That's significant for what it says about the state's overall trajectory. But Oregon, which didn't have quite so large a percentage increase, may have the more significant result out of this: The high probability, now, of getting an additional congressional district.

Oregon came close to a new one in 2010 but didn't quite cross the line. It has been on track over the last few years, but just barely. Now, its population increase is strong enough compared to other states that it well within the line for a new district.

Election Data Services, which tracks much of this, said that

The Bureau’s [Census] 2017 total population estimates shows that now 12 states will be impacted by changes in their congressional delegation if these new numbers were used for apportionment today. The state of Colorado joins the previously indicated states of Florida, North Carolina, and Oregon to each gain a single seat while the state of Texas is now shown to gain a second seat with the new data. The states of New York and West Virginia joins the states of Illinois, Michigan, Minnesota and Pennsylvania to lose a seat in Congress using the new data.
... Idaho is the nation’s fastest growing state in the past year, followed by Nevada and Utah. But this population growth has not impacted these state’s congressional allocation, at least not yet. The 2017 numbers show Idaho would stay at two seats, and miss gaining an additional seat by 118,406 people. But projecting the numbers forward to 2020 using the short-term methodology shows Idaho only 30,824 away from gaining a third seat. All the population projection methodologies keep the state of Nevada at four seats and sufficiently away from any margins of a fifth possible seat. Utah is similar in that it would take more than 125,000 extra people for the state to gain a fifth district.